by admin
4 months ago

After about 3 years of waiting, Raging Rex 2 is finally set for release. Rex is back, raging harder than before. The developer has made a wise move of retaining all the things that made the prequel a success while adding more features. Here is a full review for more details on what’s to come.

Take a look at the game metrics the slot offers:

Raging Rex 2 features a grid setup with 6 reels, 4 horizontal rows, and up to 4096 ways to win. The game’s RTP appears to have taken a hit, where we have a default return to player rate of 96.2%. The RTP varies depending on the market, even hitting a low of 84.20% in some. The volatility has also lowered to a medium rating of 6 out of 10. There is some good news, though; the win potential has increased to 30,000x the stake. The slot also remains playable on any device for players to enjoy anywhere at any time.

Start by choosing a bet from just $0.10 to $100 then click on spin or activate the auto-spin option. A win is achieved by hitting at least 3 similar symbols on any payline starting from the left.

Raging Rex 2 has various symbols, including 6 low-value Dino footprints paying 1x to 1.4x the bet. High pays include 4 dinosaurs paying 4x-6x the stake. Rex and the hatchlings are the wilds that only land on reels 2-6.

Play’n GO has retained the same captivating dinosaur theme with bold visuals. However, the natural background has changed slightly, with an added jungle feel instead of a forest one, as seen in the previous slot. The grid set is still covered in beasts to match the overall theme, but the rocks have replaced insects seen in the prequel. Rex has also been working pretty hard in those three years as we see a couple of hatchlings joining him on the grid.

When the wild Rex lands, this feature is triggered. The Rex becomes sticky and moves 1 reel left per spin. The hatchlings are also sticky during the feature, and up to 5 respins are possible.

The feature is activated by landing 3 or more scatters, resulting in an instant payout between 5x-100x the stake. Depending on the activating scatters, you’ll receive different bonus game modes, including;

Hitting 3-6 scatters activates 8-20 free spins, during which you can retrigger18 up to free spins. The wild Rex will also wander in any direction, but the hatchlings are not sticky.

Landing 3-6 scatters awards 7-13 free spins, during which you can retrigger up to 12 additional spins. The wild Rex cannot land during the feature, but the hatchlings become sticky and wander in either direction. They also land with win multipliers of 1x to 3x.

Landing 3-6 scatters results in 5-11 spins, and you can retrigger up to 6 respins. All wilds are sticky during this feature, and they can move in any direction. 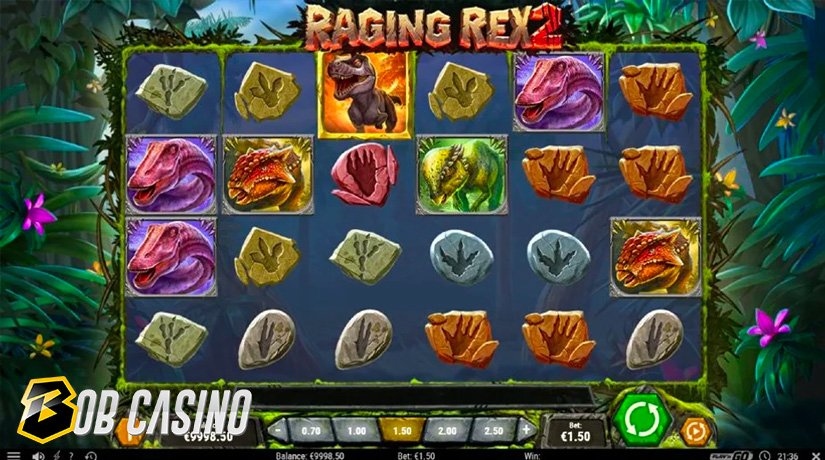 If you had missed Rex, he is back again with a bunch of hatchlings but not the kind you can pet. The slot offers decent features, including a highly rewarding max win potential and an above-average RTP. The new addition of hatchlings means more exciting bonus features, as we have seen. The developer has also retained everything we loved about the first slot and added a bunch of other features to make it even better. You definitely need to check it out.