Based on the Ronin Network, one of Sky Mavis’s Ethereum-linked sidechains, Axie Infinity is built on the technology underpinning all Crypto gaming companies.

Inspired by other popular games like Pokémon and Tamagotchi, its founder Trung Nguyen and Aleksander Larsen visioned to build a game that allows gamers to collect, care , battle, breed and trade its ingame token-based  character, also known as Axies.

Why in the News?

Axie Infinity which made its huge fan following last year as one of revolutionary crypto-focused online games could face serious selling demand as 10 million of AXS tokens which are holded by presale members and initial investors will be unlocked soon, generating selling pressure among its holders.

The repercussions could be massive and damage can range over $215 million.

According to TokenUnlocks, an online web application used to track developments in Vested tokens, near about 21.5 million tokens which is almost 8% of current total supply, will unlock on October 24, 2022 when its vesting period expires. Additionally, since the unlock schedule is based on transaction block numbers, it is anticipated that unlock will occur on October 26.

Additionally, approximately half of the proposed unlocked Axie tokens which will be worth $102 million and are meant for advisors, early investors and developer teams might decide to realize profits and try to sell their tokens.

The remaining 11 million tokens will be used for staking rewards, P2E rewards, and ecosystem funds in the future. These tokens won’t be released into circulation in the near future.

Vesting Period: What Does it Mean?

A vesting period is the amount of time compulsory for initial investors and insiders to hold their investment to prevent sudden cash out as the new investors arrive.

After the vesting period expires, the tokens are unlocked and investors are allowed to either sell or keep their holdings. In many cases, the token prices in digital asset markets can come under high selling pressure during such times. Prices for AXS have fallen since they were unlocked previously.

Selling Pressure at an all-time High: A Disaster Brewing?

In the aftermath of previous unlocking dates, Axie (AXS) saw its price drop significantly. Axie Infinity was able to successfully raise $864,000 by organizing a private token sale and selling 10.5 million tokens in the middle of 2020. The price drop was evident on observing the daily time frame chart. The price dropped over 6% before the trading period ended. There has been a loss of more than 8% of

The value of AXS during the current trading period, and that loss may continue.

Nevertheless, if selling pressure shows no sign of weakness and remains strong, a further deep dive is pretty much possible.

The project’s popularity has also eroded. Most of the players have started abandoning the game and in-game transactions also saw a huge decline since then. According to a report from DappRadar AXS lost 94% of its market worth in less than 12 months.

The Biggest Crypto Projects of the year 2022

As the latest crypto project to be released in the cryptocurrency arena this year, D2T is the latest to enter the market. The developers of D2T have promised to demonstrate more than mere words and marketing effort by showing more actions.

The main objective of this article is to try to understand the big projects that are stealing the limelight in 2022. In addition, it explains how they differ from other projects that have been launched previously like Axie Infinity.

Until now there have been relatively few cryptocurrency projects that have been launched this year, but to assist your research and understanding, we have put together a list of three crypto projects that have the most positive reviews by the critics and have some very cool concepts as well:

These Crypto Projects Include:

The Dash 2 Trade platform was long awaited as it is a platform that aims to bring a revolutionary change to the crypto currency world. This crypto currency project aims to have a different approach than regular cryptocurrency stocks. The developers are building a tax-free token, D2T, to provide support for D2T’s trading analytics platform.

With the Dash 2 Trade platform, users will have access to a number of social trading tools, metrics, and signals that can help facilitate social trading.

It is also worth noting that Dash 2 Trade investors will have access to the application that allows them to perform backtests before putting their money at risk.

The platform will also merge and show all different parameters of data indication like volume, order book activity, and volatility from different trusted crypto exchanges, to reflect the real time changes in the market.

Traders who are still uncertain may want to reevaluate their approach and make any necessary adjustments if they are still unsure.

Furthermore, users can reach back to Dash 2 Trade backtesting platform to perform additional research. Results will be instantly displayed evaluating their ideas in a real time scenario and how good it will perform in the marketplace, and risk display will also measure and display the associated risk from that particular plan.

D2T is a real utility crypto token that gives users access to the Dash 2 Trade trading terminal. The Dash 2 Trade uses its own D2T tokens as sole currency  for its Web 3.0 platform.

The analytics dashboard of D2T is built on Ethereum Blockchain. Dash 2 Trade crypto tokens are based on ERC-20 standard and are the project’s own digital asset. The project’s pre-sale event went live on the 19th of october and was able to raise $500k in the first two days.

IMPT.io is the most recently released green cryptocurrency which dedicates itself to saving the environment and is also available for pre-sale. It features a decentralized marketplace that sums up their e-commerce and environmental efforts.

The Impact Project or IMPT provides an easy way to invest in environmentally saving projects all over the globe. Any  investor holding carbon tokens can become a participant of these various save planet projects.

Investors or carbon token holders can store tokens for future investments or burn them to minimize their carbon footprint on the planet. The IMPT presale is able to successfully collect funds of $4 million. The current conversion rate is 1IMPT=$0.018. The presale price for stage 2 will be $0.023.

Tamadoge is the best utility based meme coin launched with its proven concept and successful presale that sold TAMA worth $19 million, the forecasts are very promising.

Tamadoge can change how people perceive meme coins. It is based on state-of-the-start blockchain technology and offers a wide variety of features that puts it way ahead than its competitors.

This includes their own metaverse where players breed and take care of their virtual dogs which can be sold in their dedicated NFT marketplace. Tamadoge is based on the P2E mechanism and has a long line of plans coming in the future.

Tamadoge’s metaverse, also known as Tamaverse, uses TAMA as a native token. Players have access to a wide range of options to earn more TAMA, like completing given tasks, Winning PVP battles, and topping the leaderboards each month.

Calvaria is a card game that allows players to compete in tournaments using cards. Each card holds a different character that has its own distinct set of abilities that gives them advantage during a battle.

In a tournament players are put in PVP mode to defeat their enemy by using a combination of complex strategies and tactics in order to receive rewards and special ability upgrades. 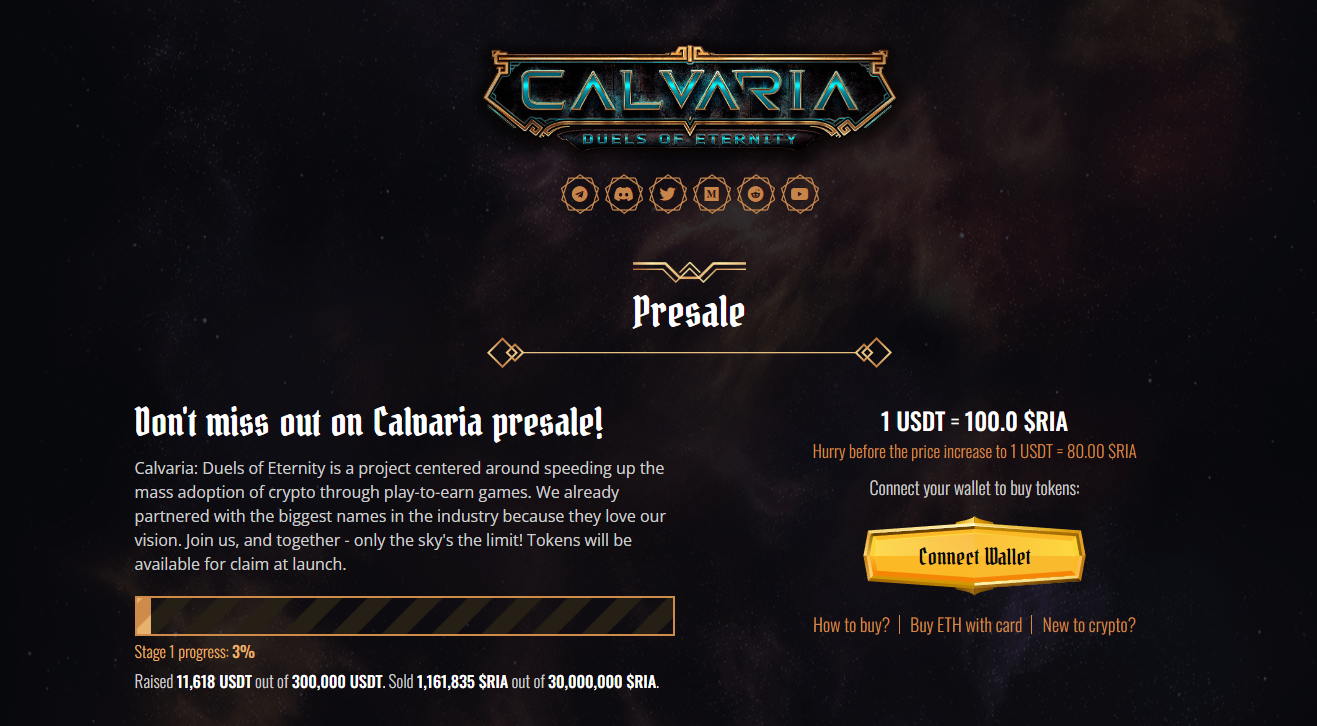 The native currency of the game is RIA token, which serves as the main component of Calvaria economy. Players can also earn RIA by playing the game and can be used to buy level up cards or in-game resources.